About Flooring Systems of Arizona

Flooring Systems of Arizona combines innovation with best-in-class service to deliver the widest variety and quality of flooring products for every application and price point in Tucson, Arizona. Every selection is meticulously crafted using the latest industry state-of-the-art technology and made from the highest quality and most durable materials.

We are committed to providing every customer the greatest service and overall experience, which means we offer you the ability to select the products you want, when you want them. From large scale commercial projects to residential renovations, Flooring Systems of Arizona transforms your ideas from vision to reality. Our standards are the highest and we’re passionate about helping everyone find unique and affordable flooring solutions that stand up to the most active spaces.

Flooring Systems of Arizona Inc., led by Victor Corella Jr. and his father, Victor Corella Sr., has made a name for itself in the Grand Canyon State, one built on a reputation of capability and resourcefulness. Headquartered in Tucson, Arizona, the flooring contractor specializes in virtually any type of flooring application, including polished concrete, carpet tile, ceramic/porcelain tile, and hardwood and vinyl. Its 65-member staff is adept at handling an array of complex products—and even the most logistically challenging installations. 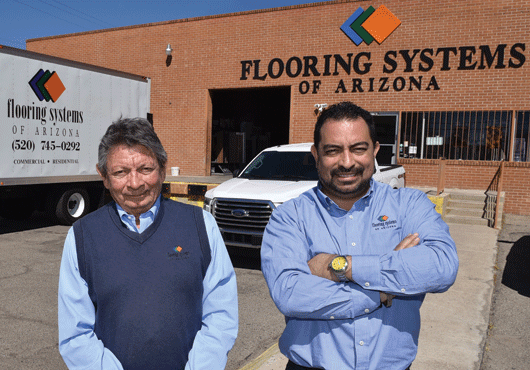 One thing that most people might not know about us is that we not only work hard—we play hard, too. Our employees are like our extended family. We do things like host company-wide barbecues, lunches and Christmas parties, and make a big deal out of taking trips to conventions together.

The company’s founder, Victor Sr., grew up in a ranching family in the small town of Imuris, in the Mexican state of Sonora. Around the age of 22, he began working as a carpet installer for a commercial flooring company in Arizona. He didn’t have any professional training, but his aptitude for the work allowed him to become proficient very quickly. As he gained experience he also made countless connections with distributors, manufacturers and other industry professionals—and developed an impeccable reputation for quality work and ingenuity.

Now 74, Victor Sr. owns the business equally with Victor Jr., who joined the business in 2005 and became President in 2012. The father still actively oversees tasks in the field while the son handles most of the operations and sales responsibilities.

Written by Erica Bender for TheBlueBook.com

How long have you been in business?

We have proudly served our Tucson community since 1998.

Does Flooring Systems of Arizona have any showrooms or retail stores?

Yes, our showroom is available to view by appointment only.

What brands does Flooring Systems of Arizona carry?

We try to carry only the best; these include: Bliss, Camelot, Mohawk, Royalty, Shaw, and Tuftex. If you'd like to know if we carry a specific brand not listed, please contact us.

Do Flooring Systems of Arizona services and products carry any warranty?

Yes. All of the products carry both a manufacturer’s product warranty and a limited Installation Warranty.

How many employees are on the Flooring Systems of Arizona team?

We have a one-of-a-kind 65-member staff. We pride ourselves on the amount of talent and respect that exists within our company.

Where are you located?

If you have any questions, please let us know.